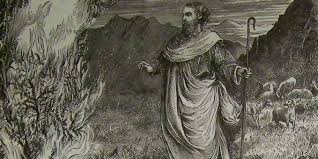 Lift Up Your Hearts: Moses and Jesus

As a kid, one of my favorite biblical figures was Moses. We would often watch the 1956 rendition of The Ten Commandments with Yul Brynner and Charleton Heston.

I always liked how Moses grew up in the house of the Pharaoh, but then discovered his true identity and ended up leading the Hebrew people out of slavery.

There are so many fascinating stories from the life of Moses. He was saved as an infant from the edict of the Pharaoh which ordered the killing of all Hebrew boys, because the people were becoming too populous. He was found and adopted by the Pharaoh’s own daughter who discovered him in a basket floating in the Nile river. After growing up as an Egyptian, he comes to know his heritage as a Hebrew and ends up killing an Egyptian who was beating one of his fellow Hebrews. He then flees Egypt and becomes a shepherd near the mountain of God called Sinai. Then God, from a burning bush that was all aflame, yet not consumed by the fire, calls him to go back to Egypt. Moses returns and sets the people free by prophesying the 10 plagues that God sent upon the Egyptian people.

To imagine these 10 plagues is quite frightening. To name a few, all the water of the Nile turned to blood, the Lord sent frogs and gnats, then boils, then fire hail from the sky, then three days of darkness, and then finally the death of all the first-born Egyptians on the first Passover. It was the death of all first-born Egyptians that brought about the liberation of Israel from slavery.

One of my favorite Moses stories is the crossing of the Red Sea. After leaving Egypt, Moses and the Israelites camp by the Red Sea, while Pharaoh and his whole army come after them to recapture them into slavery and return to Egypt. The Lord tells Moses to hold up his staff and split the sea. The Hebrews then cross through the sea on dry land, but when the Egyptians try to follow, Moses holds out his staff again and the sea covers them all. This solidifies their freedom from Egypt. The people of Israel then arrive at Mount Sinai, where they eventually receive the Ten Commandments. Yet while Moses is up on the mountain receiving the law from God, the people, frustrated and impatient, make a golden calf and begin to worship it. What follows is 40 years of wandering the desert. The Lord however, always merciful, feeds the people with bread that comes down from heaven called Manna and provides water from rocks struck by the staff of Moses in order to satisfy the thirst of the people. For the rest of his life, Moses speaks to God and intervenes for the people, who constantly complain and turn against both Moses and the Lord. God continually uses Moses to mediate the old covenant law to Israel.

There is so much that happens in the life of Moses that prefigures what will eventually happen to Jesus and is fulfilled by the life of Jesus. This weekend’s first reading, from Deuteronomy, describes the scene where Moses proclaims to the Hebrew people that God will send another prophet like him. He explains “A prophet like me with the Lord, you God, raise up for you from among your own kin; to him you shall listen. This is exactly what you requested of the Lord, your God at Horeb on the day of the assembly, when you said, ‘Let us not again hear the voice of the Lord, our God, nor see this great fire any more, lest we die.’ And the Lord said to me, ‘This was well said. I will raise up for them a prophet like you from their kin, and will put my words into his mouth; he shall tell them all that I command him. Whoever will not listen to my words which he speaks in my name, I myself will make him answer for it’” (18:15-19). Jesus is the prophet, like Moses, who becomes the mediator of the new covenant. Instead of setting the people of Israel free from physical slavery in Egypt, Jesus offers His life to free us from the slavery of sin. The first Passover in Egypt is fulfilled at the last supper as Jesus sets up a new covenant in His body and blood, where His disciples are to eat His body and drink His blood. In Egypt, the people sacrificed unblemished lambs and had to sprinkle the lambs blood on the wood of the doorposts and lintels of their homes so that the angel of death, seeing this blood, would pass over them and let their first born children live.

In a similar way, Christ, who is called the Lamb of God in the New Testament, becomes the newly sacrificed Lamb of God, whose blood is “sprinkled” on the wood of the cross, and which we then receive in the New Passover meal of the Eucharist. This is why Jesus said in John’s Gospel “Unless you eat the flesh of the Son of Man and drink His blood, you have no life within you” (John 6:53).

There is another interesting Moses story that tells of the people of Israel complaining about being tired of the Manna, the Lord send serpents to bite them and many die. Once they realize their mistake, Moses is told to make a bronze serpent and to mount it on a pole. Those who had been bitten had to only gaze upon the bronze serpent to be healed and saved from death. Jesus himself says to His disciples “as Moses lifted up the serpent in the wilderness, so must the Son of man be lifted up” (John 3:14). Jesus was speaking of being raised up on the Cross. The people had to gaze upon a symbol of that which bit them. Christ became sin for us, taking upon himself all of our guilt and sin. “They shall look upon him whom they have pierced” (Zechariah 12:10).

Jesus not only speaks the word of God to the people, but becomes the source of the New Covenant. In the Eucharist He offers us the new bread of life come down from heaven, and “the bread that I will give is my flesh for the life of the world” (John 6:51). He is also prefigured in the rock that was struck by Moses. His side was struck by the soldiers on Calvary and from his side came forth water and blood. This is given to us in the chalice that our thirst for life and salvation might be satiated in Christ. And just as the waters of the Red Sea destroyed the Egyptians seeking to enslave the Hebrews, the soul that is placed into the waters of baptism receives from the flow of water coming from Christ’s side, the cleansing from original sin.

These are just a few of the ways that Moses prefigures Christ and that Christ fulfills all of the Old Covenant given by God through Moses. The connection between the two figures brings together much of the history of salvation found in Sacred Scripture. May the Lord enlighten our hearts to understand the fulness of His gift of grace in the New and Everlasting Covenant.