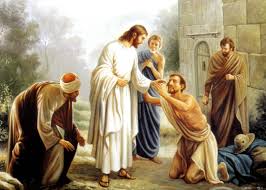 Lift Up Your Hearts: Know Your Opponent

Through middle school and high school my favorite sport was basketball.

No surprise there I suppose, as I am a 6-foot-4-inch man.

I remember spending hours and hours shooting on my own and then playing game after game of one-on-one with my younger brother, Sam. We were a pretty good match for each other, although I was always taller so I usually had a slight advantage. We loved the game so much that we even combined our savings one spring and had my dad build us a big cement court out past our garage at our home. Playing basketball, like any sport, you spend most of your time focusing on getting better and better along with the various elements of the game. For instance, spending hours and hours just dribbling, learning how to dribble the ball between your legs, and how to jump or spin without being penalized for “carrying” the ball or “traveling.” Of course, most of my time was spent practicing shooting. While it is necessary to become good at the offensive game, most coaches will tell you that it is defense that wins the most games. You have to learn to play defense. To do that well, coaches teach different forms of defense, the most common are man-to-man or zone defense. They also teach various defensive presses: full-court or half-court press, which put pressure on the other team as they come up the court. Still, at the end of the day, for most of us the main focus is on developing your personal skills and getting better at them.

As you continue to practice both on your own and with your team, there are times when the coach talks to you about the upcoming opponent, especially right before games. He might even have you watch films or study certain players of the other team to help you prepare for them. It’s important to learn the opponent’s strengths and weaknesses so that you know what to guard against and what weaknesses to exploit in order to get the win. I remember one particular team we played in high school that had a player who would regularly score 30 points a game. Our coach decided to run a “box and one” defense, which is four guys on zone defense and one guy guarding the offensive threat, “man-to-man.” I was chosen to play “man-to-man.” Because I had been prepared, and knew what to expect, I stuck on my opponent like crazy glue. If I remember correctly, he only scored maybe 4 or 6 points against me, and maybe 12 points the whole game. We won that game, and I believe it was thanks to studying our opponent and knowing how to defend and where to attack.

Both last week’s and this week’s Gospels from Mark speak about Jesus battling against demons. In Mark’s Gospel last week, the first miracle that Jesus works is casting out a demon in the synagogue. This week, Jesus goes home to Capernaum. First he heals Simon Peter’s mother-in-law, but then the people of Capernaum bring him many who are possessed by demons. The passage states:

“On leaving the synagogue Jesus entered the house of Simon and Andrew with James and John. Simon’s mother-in-law lay sick with a fever. They immediately told him about her. He approached, grasped her hand, and helped her up.

Then the fever left her and she waited on them. When it was evening, after sunset, they brought to him all who were ill or possessed by demons. The whole town was gathered at the door. He cured many who were sick with various diseases, and he drove out many demons, not permitting them to speak because they knew him. Rising very early before dawn, he left and went off to a deserted place, where he prayed. Simon and those who were with him pursued him and on finding him said, ‘Everyone is looking for you.’ He told them, ‘Let us go on to the nearby villages that I may preach there also. For this purpose have I come.’ So he went into their synagogues, preaching and driving out demons throughout the whole of Galilee” (Mark 1:29-39).

In recent weeks, we have been looking at the beginning of Jesus’ mission. Mark’s perspective shows us that one of the main reasons that Jesus has come is to destroy the power of the enemy that binds us in sin. I know that for many of us, we do not like to think about the devil, or sin for that matter. Much like basketball, we would like to spend most of our time focusing our spiritual journey on becoming more like Jesus. He is the one that shows us how to live. However, Jesus is also the best of coaches, who knows the enemies tactics and so it’s important to learn these tactics so that we are able to defend ourselves against them.

The Catechism of the Catholic Church points out the fact that the Devil and demons are fallen angels. There are some who say that the Lord showed all the angelic creatures His plan for humanity, and that it was out of envy for humanity that the Devil made an irreversible choice to not serve God’s plan. It is irreversible because the angelic creatures are pure spirits outside of time. If you think about it, the only way that we can see time is in the change that happens in material being, for instance, movement from one place to another. Since the angels are immaterial, there is no time for them. They were given one choice to either serve God or not. Many chose not to serve and now, because of their hatred for God, they try to keep us from knowing Him, from believing in Him and from seeing His beautiful plan for us.

Many of the encounters in Scripture between Jesus and demons portray the authority that Jesus has over them. They all seem to cry out and to flee. There are some that create a lot of confusion and make a lot of noise on their way out, but that’s only because they are sore losers that know that they have no more power. Although Christ is victorious over this opponent of ours, it is important that we participate in His victory, that we learn from Him in prayer what God is telling us verses what our enemy wants us to believe. A major element to this is learning what God’s voice sounds like verses what the devil’s voice sounds like. What we notice in all the encounters between the demons and Jesus is that, in His presence, they are agitated, noisy and angry. Their voices make a lot of noise, they bring anxiety, despair, condemnation, worry, fear, hatred, confusion, and division.

The Lord’s voice on the other hand is quiet and still, it brings us consolation, comfort, love, hope, joy, strength, freedom and peace. While they seem so obviously opposite, we do not always pay attention to the sources of our thoughts and our feelings. Turning to the Lord in prayer and listening to His voice in Scripture will help to recognize Him and also help us to discern the difference between His voice and the voice and tactics of the enemy. Give Christ the victory in your hearts. He has already shown Himself victorious over the Devil. We want that victory to reign in us as well.