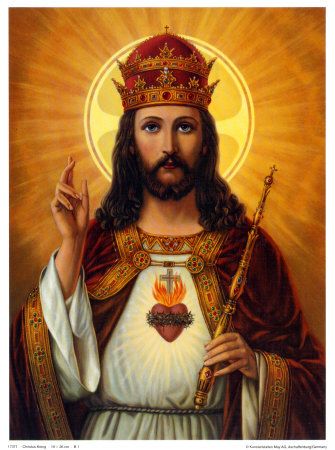 Lift Up Your Hearts: Christ, the King of the Universe

This weekend we approach the end of our Liturgical year with the celebration of Our Lord Jesus Christ, King of the Universe.

This celebration was established fairly recently by Pope Pius XI in 1925. It was established to remind Christians that our first allegiance is not to the power of a worldly government, but rather to God who is our true king, He who gives us freedom and peace and leads us to eternal life. No kingdom established in this world can ultimately accomplish these things. This feast was also established so that nations around the world could be reminded that honor and obedience belong to Christ. This is not just for private individuals, but also for whole countries. Thirdly, it was established so that Christians could be inspired, and could aspire to live their lives completely for Christ as true disciples, to become formed and transformed by His life and His grace.

In the celebration of the Liturgy this feast falls at the very end of the liturgical year. Our liturgical year begins with the first Sunday of Advent, which is the preparation season that comes directly before the Christmas Season. Advent and Christmas begin our liturgical year because we contemplate the beginnings of our salvation with the arrival of our Savior in the incarnation: God made flesh. The feast of Christ the King is the end of the liturgical year because after having contemplated the last four things — death, judgment, heaven and hell — we come to the end when Christ will definitively establish the fullness of His kingdom forever and bring death and sin to an end. The Scriptures remind us “For he must reign until he has put all his enemies under his feet. The last enemy to be destroyed is death” (1 Cor. 15:25-26). St. Paul then explains that “When the perishable has been clothed with the imperishable, and the mortal with immortality, then the saying that is written will come true: ‘Death has been swallowed up in victory. Where, O death, is your victory? Where, O death, is your sting?’ The sting of death is sin, and the power of sin is the law. But thanks be to God! He gives us the victory through our Lord Jesus Christ” (1 Cor. 15:54-57). Therefore, what we celebrate is the ultimate victory of Our Lord Jesus when He will bring all things to completion and will be the judge of the living and the dead.

In the Gospel reading this weekend Jesus tells us what Judgment Day will look like. It is a bit long, but I think that reading it through has great value. Jesus said to his disciples: “When the Son of Man comes in his glory, and all the angels with him, he will sit upon his glorious throne, and all the nations will be assembled before him. And he will separate them one from another, as a shepherd separates the sheep from the goats. He will place the sheep on his right and the goats on his left. Then the king will say to those on his right, ‘Come, you who are blessed by my Father. Inherit the kingdom prepared for you from the foundation of the world. For I was hungry and you gave me food, I was thirsty and you gave me drink, a stranger and you welcomed me, naked and you clothed me, ill and you cared for me, in prison and you visited me.’ Then the righteous will answer him and say, ‘Lord, when did we see you hungry and feed you, or thirsty and give you drink? When did we see you a stranger and welcome you, or naked and clothe you? When did we see you ill or in prison, and visit you?’ And the king will say to them in reply, ‘Amen, I say to you, whatever you did for one of the least brothers of mine, you did for me.’ Then he will say to those on his left, ‘Depart from me, you accursed, into the eternal fire prepared for the devil and his angels. For I was hungry and you gave me no food, I was thirsty

This passage makes it quite clear how to live our lives if we desire to have eternal life. God will separate the sheep from the goats and will give to those on His right the kingdom. Again, as we have said multiple times, He desires us to reign with Him and to have access to the fullness of divine life in heaven. We simply need to say yes to Him to the point where our lives show that we do desire this. We need to let the life of Christ reign in our hearts so much so that it overflows into actions of love for our neighbor, especially for those most in need. We are going to be judged based on how much we allowed the life and love of God to live in us and to transform us. Let Jesus be King in your hearts. Let His word encourage you and strengthen you. Let His grace and transformation take hold in your life so that, shining His light, you might build His kingdom, and that you may be brought ultimately to share in its fullness forever.